The Empires of old usually revolved around their city-states, given that in those days mostly city-states existed. They were entities that forced themselves on other Kingdoms usually of different races and nationalities, and were more interested in tributes/taxes that these Kingdoms could provide the Emperor, not so much in territory per se. The whole idea of these Empires was to collect revenue – that’s why their tributaries were called vassal states. 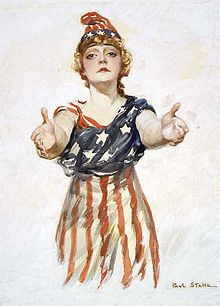 The modern European powers reconfigured the way Empires work. They invaded other Kingdoms in order to pillage the resources of those they conquered. So land and territory mattered. After all, no one knows what’s hidden beneath even the most god-forsaken land. Thus, better grab as much land as possible and expand the conquered Kingdoms’ territories.

The USA further reconfigured the way Empires work. The US Empire bribes the governments of other countries – using “Foreign Aid” – to maintain the hegemony of the US Dollar, and pillage the resources of these nations through the infiltration of American companies and the intimidation of US military bases. In other words, the Jewish Oligarchic Elite, as the “Emperor,” wags the US Empire for its own benefit.